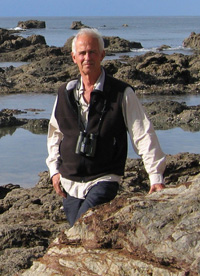 Wildlife-artist/Biologist Hans J Geuze was born in Bergen op Zoom in The Netherlands, and studied Biology at the Free University of Amsterdam where he also obtained his PhD degree. He became professor of Cell Biology at the University of Utrecht in the Netherlands, where he was in charge of a cell biological research group at the Utrecht Medical Center untill his retirement. Prof. Hans J. Geuze is member of the Dutch Society of Arts and Sciences (KNAW).

Already as a child, Hans J Geuze sketched and painted birds and butterflies. Geuze’s favourite painting medium is transparent watercolours. He is inspired by light, colors and patterns, and wishes to share his excitement through his paintings. His art has been shown in many national and international exhibitions and publications.

Together with the Nature Group of Kockengen, Geuze initiated the establishment of the nature reserve Polderreservaat in the “Green Heart of Holland”, and belonged to the founders of the Artist for Nature Foundation (ANF) of which he was the 1st president with Ysbrand Brouwers as director. The ANF hosts an international group of more than 100 painters and sculptors inspired by nature in its broadest sense. The ANF aims at attracting public and political attention to threatened nature areas in the world by organizing artistic workshops, exhibitions and press meetings, and by publishing art books.

As artist, Hans J Geuze participated in several ANF projects including “Wind, Wad en Waterverf” on the Dutch island of Schiermonnikoog, “Portrait of a Living Marsh” in the Biebrza Valley in Poland, “The Flight of the Cranes” in the Spanish Extremadura, “The Copper River Delta” in Alaska and the project “Sails, Wind and Meadow Birds” in the province of Utrecht in The Netherlands.

Geuze belongs to a group of enthousiastic birdwatchers named KOAG. With his wife Judith and this group he travels already for more than 20 years around the world. He has spotted more than 4000 bird species.